Home of the Sheeple

Baaah is a stage located in The Meadow. It is home to the Sheeple and to Pom.

In the Salt Mines 2.0 update, the Rainy variant was removed from the game.[1]

Baaah is Pom's map. It has the old look of a village (Seen by the wind-mill). The background consists of a few hills far off, a river with a bridge, and a windmill near the fight. When it is raining, the sheep like to wear little umbrella hats. To the left is a trellis arch.

During a fight, these NPCs have a chance of appearing as background characters: 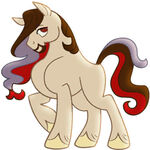 Add a photo to this gallery

Retrieved from "https://stampede.fandom.com/wiki/Baaah?oldid=3848"
Community content is available under CC-BY-SA unless otherwise noted.